Broken Lives – The book that exposed miscarriage of justice in Perth in the ‘60s and led to two wrongfully-convicted killers being exonerated four decades later. 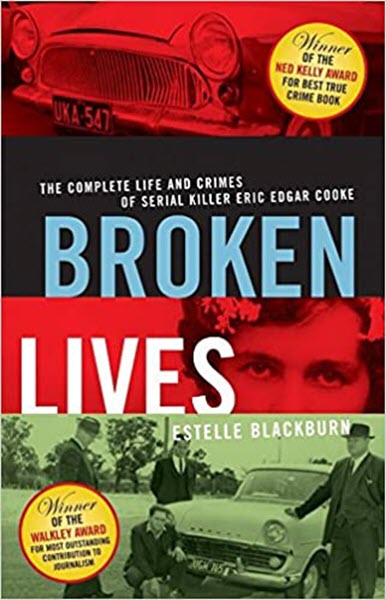 John Button and Darryl Beamish had lost all hope of proving their innocence until Estelle, a journalist with no legal training, came along and tenaciously searched out the truth.

Never giving up, she sleuthed and wrote the book over six years, then continued to campaign and work with lawyers and other volunteers over a further seven years to ensure Button and Beamish won the new Appeals her revelations gained for them.

Never before in Australia has such long-standing convictions been overturned.

Both men – then 19-year-old youths – came close to execution. Beamish was condemned to death, but it was commuted to life imprisonment and he served 15 years. Button would have faced execution if the jury had brought back guilty to wilful murder. But it convicted him of the lesser crime of manslaughter and he was sentenced to 10 years imprisonment with hard labour.

Estelle’s 13-year justice crusade for justice won her is an Order of Australia for community service through investigative journalism, and the prestigious national Walkley Award for the Most Outstanding Contribution to Journalism.

She also won WA’s Clarion Award for the most outstanding contribution to the profession and the Perth Press Club award for sustained excellence in journalism. She was named as one of Lotterywest’s 25 most inspirational Western Australians in Scoop Magazine last year.

It reveals for the first time, the full life and crimes of Eric Edgar Cooke – including 12 assaults and attempted murders that the police didn’t want anyone to know about. They covered them up, never making a public announcement that Cooke had committed these along with the two other assaults and murders.

The book can be bought on-line, especially at:
Booktopia
Boffins Books WA (also in store)

Random, incomprehensible violence…unspeakable crimes…a peeping Tom crouching excitedly at bedroom windows and lovers’ cars…Blackburn’s meticulous reconstruction of these frightening times is a masterly piece of work – and definitely not for bedtime reading…step by step she has uncovered the terrible details of Cooke’s murders…an outstanding work of investigative journalism.

A painstakingly researched book that throws new light on Cooke’s crimes and points to what may be one of the worst miscarriages of justice in Australia…Blackburn’s image of Perth in the 1960s and her account of the impact of Cooke’s reign of terror is compelling…that the story she tells is true….makes an extraordinary story.

I have known Estelle Blackburn for 20 years, and more closely for the past six years since she approached me to represent John Button and Darryl Beamish in their new appeals before WA’s Court of Criminal Appeal. I readily took on these cases pro bono once I read her book ‘Broken Lives’ and discovered the excellent argument she presented for their innocence and realised the effort Estelle had put into redressing these injustices. Thanks to her dedication over a period of 14 years, John Button has been exonerated of a wrongful conviction perpetrated on him 39 years earlier, and Darryl Beamish’s wrongful conviction in 1961 is now in the hands of the Court of Criminal Appeal. It took an inspired outsider like Estelle to bring these legal and social milestones in the history of WA, for no financial reward.

I can happily vouch for Estelle’s impeccable good character. Proof lies in her compassion for the suffering of two complete strangers to her in Button and Beamish, her love of truth, commitment to rectifying injustice and history through passionate persistence and her unrelenting determination to win against the odds. At great personal sacrifice, she selflessly gave up a successful career as Press Secretary to the Premier to devote years of her life, and all her savings and more, to a task that would be just too daunting to most, but to which she applied her superhuman doggedness and tactfulness. Her thoughtful devotion to other victims caught up in this tragedy also brought healing to those who had never had acknowledgement or recognition or their hit-run attempted murders and violent assaults while asleep.

Not resting on her laurels at this success, Estelle has been devoting her time and energy to other people suffering wrongful convictions and is also applying herself to efforts to establish a sorely needed Innocence Project in Perth so that there is a far bigger resource base to help those suffering from the results of police and prosecution malpractice.
30 April 2005

Graphic and gripping…magnificent…one of the greatest works I have ever read on crime, courts and police…amazed at the detail…the Australian literary equivalent of In Cold Blood (Truman Capote) and Executioner’s Song (Normal Mailer). Estelle Blackburn is one hell of a brilliant author.

Brilliant reconstruction of the crimes of Perth’s hare-lipped serial killer…this six-year reinvestigation leaves no room to doubt that Darryl Beamish did 15 years for a murder committed by Cooke in 1959 and that John Button did five years for a 1963 murder by Cooke. Why do the guilty get off while innocent people such as Beamish, Button and Lindy Chamberlain go to prison?

In searching for answers concerning a possible miscarriage of justice, Estelle Blackburn has provided a detailed reconstruction of a series of events which illuminate the social history of Perth in the 1960s. Focusing on the extraordinary and chilling crimes of serial killer Eric Edgar Cooke she provides a fascinating insight into what made Cooke tick, while the narrative makes for engaging, indeed gripping reading at all times. This may have been a book written primarily in the attempt to argue the case for a particular individual but the end product is much more than that. The impressive list of sources both written and oral is testimony to the extent of her achievement.

Select Editions, Reader’s Digest (letter to author when including it in their Encounters edition, October 2002):

..an eye-opening account of the terrible things that can happen when the law is in error, and the grave damage serial killers inflict, not just on individuals and their families, but on the community as a whole. …..we feel sure readers will respond to your detailed and moving account of the ordeal John Button suffered.

Broken Lives rewrote the past and changed the future of all it touched.

It’s the best true crime book I’ve read since Sins of the Brother, Mark Whittaker’s account of the Backpacker Murders. Blackburn set out to write a “true crime novel”, a la Capote’s In Cold Blood, rather than a more dry journalistic account, and the book works on several levels: gruesome chiller, police procedural, legal drama, and a fascinating picture of Perth in the
Late 1950s and early 60s.

Broken Lives delves into the life of convicted serial killer Eric Cooke – the last man hanged in Western Australia – and has had a lasting effect on the state’s justice system.

Describe your book in one word: powerful. You did a truly wonderful job both engaging the reader and engrossing the expert.

I have just finished reading Broken Lives. What a masterpiece.

I treasure the book, not only because it is a good read but because of what it represents.

Winner -Award for the Most Outstanding Contribution to Journalism 2001

Displaying professional courage, her work and painstaking research served to uncover concealed evidence of alleged police blunders and the tragic consequences for two people. It also, for the first time, detailed the life and times and unreported crimes of the last man hanged in WA, Eric Edgar Cooke…….Apart from the overwhelming public interest and public good served by her work, Estelle Blackburn also immeasurably raised the status of journalists and journalism in the eyes of the public.

The world needs people like Estelle Blackburn with the passion, strength of conviction and sheer courage to hold to her beliefs in spite of the powerful resistance she experienced.

Neil Prior – The West Australian

Rarely has a piece of journalism had the impact as that of Estelle Blackburn’s book Broken Lives….it brought into sharp relief what many of us had suspected for years: all was not well in the WA police force and in the State’s justice system.”

(He said the book should be standard issue at the WA Police Academy ‘so young police officers know the damage they can do when they rely on a dodgy confession to charge someone.’)

Niel Prior
The West Australian